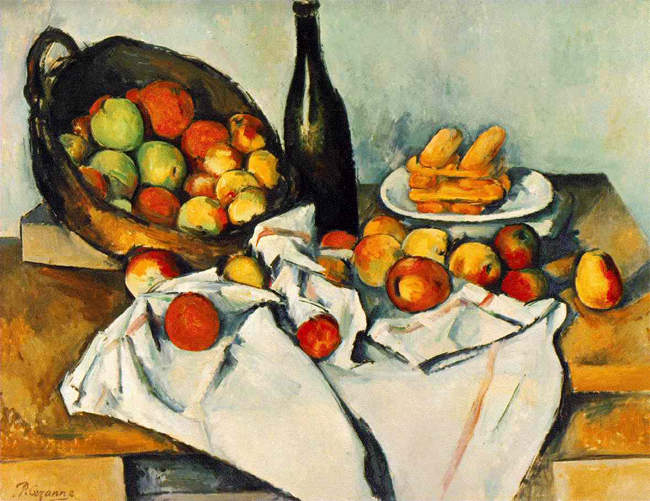 Paul Cézanne was born on 19 January 1839 in Aix-en-Provence, in Provence in south of France. His father was a successful banker and his father wished him to pursue a ‘respectable’ career. To please his father, between 1859 and 1861 Paul Cezanne attended the law school of the University of Aix. However, in 1861, he became disillusioned with this career path and dropped out to pursue his life’s passion – art.

With the encouragement of his great friend Emil Zola, Paul left for Paris and sought to further his artistic career.In Paris, he met the Impressionist artist, Camille Pissaro. Pissaro acted as Master to the young Paul. However, over time, the student became as respected as the Master.In 1870, the Franco-Prussian war broke out and Paul Cezanne fled with his mistress to Marseille. He was caught as a draft dodger, but, soon after, the war fortunately ended.His final years of his life from 1878-1905 were spent in Provence. It was here that he increasingly developed the style of his paintings and moved beyond a classic impressionist style. He used planes and blocks of colour to give a more abstracted observation of nature. It was this abstract innovation that was said to be a key element in the link between the 19th Century impressionist art and the modern art of Matisse and Picasso of the Twentieth Century.

The Basket of Apples

Paul Cézanne once claimed that art is a harmony running parallel to natureand not an imitation of nature. In his quest for underlying structure and composition, he recognized that the artist is not bound to represent real objects in real space. Thus, The Basket of Apples contains one of his signature tilted tables, an impossible rectangle with no right angles. On it, a basket of apples pitches forward from a slablike base, seemingly balanced by the bottle and the tablecloth’s thick, sculptural folds. The heavy modelling, solid brushstrokes, and glowing colours give the composition a density and dynamism that a more realistic still life could never possess.

This painting, one of Cézanne’s rare signed works, was part of an important exhibition urged on the artist by the Parisian art dealer AmbroiseVollard in 1895. Since Cézanne had spent the majority of his career painting in isolation in his native Provence, this was the first opportunity in nearly twenty years for the public to see the work of the artist who is now hailed as the father of modern painting.

8 thick slices from a French Stick